What is a family farm to you?

To the average consumer, a family farm is a small, sustainably operated, family-run farm where animals are presumably afforded a higher quality of care and compassion throughout their lives. Consumers prefer to support family-owned, “Mom and Pop” businesses because they’re considered more trustworthy than large faceless corporations that value profits over quality. Especially in regards to the food we eat, quality is of tantamount importance.

So it’s no wonder the Dairy Industry wants to make sure consumers know that every dairy product they purchase goes a long way to helping support family farms, which according to their statistics, make up the overwhelming majority of all dairy farms.

The USDA, Dairy Management Incorporated, and The California Milk Advisory Board are just a few of the organizations promoting the friendly face of family farming.

The direct quote from Dairy Management Incorporated (affiliated with the National Dairy Council, the American Dairy Association, and the U.S. Dairy Export Council and the Innovation Center for U.S. Dairy) says:

“About 97% of U.S. dairy farms are family-owned and operated.” – Dairy Management Incorporated

There seems to be a slight difference of opinion between DMI and the USDA, whose agriculture census says that “77% of farms that sold milk from cows in 2012 were family or individually owned.”

California is the largest producer of dairy products in the U.S. (excluding cheese) and annually produces 1 out of every 5 glasses of milk the nation consumes.

Based on these stats, there sure seem to be a lot of family farms out there making dairy, right?

Get Big or Get Out

Unfortunately, a lot of farmers disagree.

At farming’s peak in the U.S. in 1935, there were over 6 million farms. 80 years later, that number has been slashed to 2 million despite the U.S. population almost tripling since then. More farmers are leaving their land and calling it quits because it’s simply too hard to compete with giant commercial farms.

A combination of factors have contributed to this exodus, including the development of more efficient modern industrial farming tools, outsourcing farm work to food processing and packaging companies, federal subsidies and regulations since the 1940s that benefit large farms while hurting small farms, and the following pressure on small farms to ‘get big or get out’ by essentially cannibalizing each other. 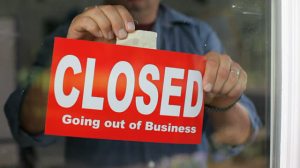 We’ve seen this happen to small business in general in the U.S., where giant corporations like Walmart undercut the prices of “mom and pop” shops, forcing them into bankruptcy, and absorbing their customer base.

Despite overwhelming evidence that family farms are in decline and rapidly going out of business each year, organizations like Dairy Management Incorporated and The California Milk Advisory Board are promoting that family farms are doing so great, they actually make up the vast majority of farms across the nation.

So, Who’s Lying and Who’s Telling the Truth?

The problem comes from a misinterpretation of what the term “family farm” actually means and how different groups use it.

Since the Dairy Industry got their statistics from the USDA, it only makes sense to find out how the USDA defines the term:

“The current definition of a family farm, since 2005, based on the Agricultural Resource Management Survey is one in which the majority of the business is owned by the operator and individuals related to the operator by blood, marriage, or adoption, including relatives that do not live in the operator household.” – United States Department of Agriculture Economic Research Service

Contrary to the average consumer’s idea of what a “family farm” is, the USDA definition includes farms of all sizes, including factory farms. Furthermore, according to the USDA definition, a family farm’s sustainability and animal welfare and labor practices have zero influence on their inclusion in the “family farm” category. In order for a farm to be considered a “family farm” by the USDA, it simply has to have the majority of the business ownership belong to a family.

To put that in perspective, using the USDA’s definition, Walmart counts as a family business just as much as the mom and pop’s it regularly forces out of business.

What this all boils down to is the USDA having one definition for “family farm” and consumers having another.

Depending on how you feel about the Dairy Industry, this could at best be an honest mistake in communication, and at worst, a slimy manipulative tactic to pull the wool over the eyes of consumers.

To figure out which, we need to examine not just the words in the claim, but also their implicit meaning.

Reading Between the Lines

Let’s take a step back.

What was your first thought when you read these stats:

These aren’t neutral statements that simply recite statistics with no emotional strings. These statements are intended to be interpreted as more than empty numbers and figures. They’re intended to have emotional value for the consumer.

First, they’re coming from the Dairy Industry in the form of an advertisement. As a rule, advertisements don’t promote something about a product unless it has some sort of value to the consumer.

Michael Freeman, VP of Advertising for the California Milk Advisory Board explains why these stats should matter to consumers:

“Dairy farming is a vital, important part of California that is made up of people, families and generations of history – not unfeeling corporations. In California, 99 percent of our dairies are family farms. This heritage comes through in the care they take with their animals and in preserving the family farm for future generations. You can sense the real, personal connection that is made with each family when you view these commercials.” – Michael Freeman, VP of Advertising, California Milk Advisory Board

Second, family farms are supposed to be a good thing, right? Even Michael Freeman’s description of family farms more closely matches the consumer definition than the generalized USDA definition, which places no importance on ethical business practices.

It leads the consumer to the conclusion:

“I can feel good about purchasing dairy products.”

You might ask, “what’s wrong with that if most dairy farms actually are the type of family farms the general public wants to support?” After all, just because the USDA definition of “family farm” includes factory farms that operate with low sustainability and low animal welfare and labor standards doesn’t mean that those types of farms are in the majority.

Getting the Numbers Straight

So how many U.S. dairy farms actually embody the consumer definition of a family farm? Specifically, how many “family farms” are small enough to reasonably be expected to be able to practice the stringent quality controls regarding worker, environment, and animal care the general public expects from a family farm?

These numbers were pulled directly from the USDA’s 2007 Census of Agriculture.

The first thing you’re likely to notice is that there are a lot of small farms and very few large farms. So far, so good, right?

The second thing you’re likely to notice is the market share of different farm sizes — that is, the percentage of total sales each farm size commands. This figure is important because it directly translates into how likely a consumer is to purchase dairy products from a family farm that fits the consumer definition, versus a family farm that only meets the USDA definition. 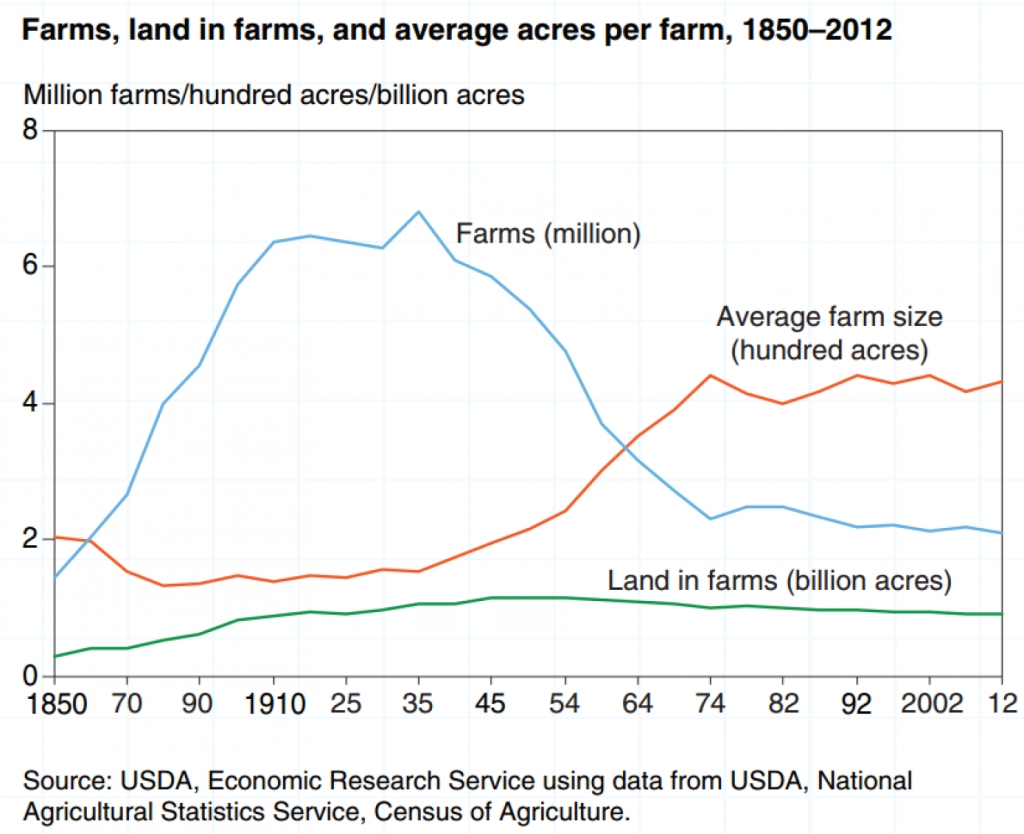 All of this confirms that small-scale farming as a way of life is in sharp decline. Despite out-numbering large farms 10:1, based on market share, small farms are hardly even players in the dairy field.

This is especially true when you consider that most people don’t just consume dairy products at home, but also at restaurants, houses of friends and family, and other places where they have less control over the source of their dairy.

But let’s not jump to conclusions just yet. Just because a farm is large doesn’t necessarily mean it’s unsustainable, right?

The size of a livestock farm matters to the EPA because there are serious environmental impacts from large-scale animal agriculture.

“One animal facility with a large population of animals can easily equal a small city in terms of waste production.” – EPA (Risk Assessment Evaluation for Concentrated Animal Feeding Operations)

Because of this, the EPA measures a farm’s size by the amount of waste it produces based on the number of animals on the farm. They separate these farms into categories from “small” to “large.”

So how much dairy comes from these kinds of places?

Livestock farms have become fewer in number but larger in size. Since 1950, the production of livestock and poultry has more than doubled, but the number of livestock operations have gone down by 80%. This means that the vast majority of animal products produced today come from large CAFOs.

The USDA confirms this, stating that “66% of all dairy sales come from the 3% of farms that are large or very large family farms.”

So if the stats show that the majority of dairy products come from large farms and CAFOs, why does the Dairy Industry seem to think otherwise?

Can’t Have It Both Ways

According to Dairy Herd Management, the purpose of the “family farms” ads are to “give consumers a clearer understanding of where dairy products come from and showcase the people who produce them.”

“We want to help consumers put the face on the farmer responsible for the dairy foods they enjoy. There’s a family dairy farmer and personal story that comes with every glass of milk, piece of cheese, scoop of ice cream and pat of butter you purchase. These are fascinating people once you get to know them.” – Michael Freeman, VP of Advertising, California Milk Advisory Board

Based on the content of the ads and the explanation above, it’s clear the Dairy Industry is using the same definition of “family farms” that consumers do, which makes sense since advertisements are communications between producers and consumers, so using the same language helps get their message across.

But if that’s the case, then why are they using USDA stats based on the far more generalized USDA definition, which we know doesn’t account for farm size, sustainability, or ethical animal welfare and labor practices? Shouldn’t the Dairy Industry be using a stat that measures only the farms that fit the “family farm” definition they’re using?

Putting The Pieces Together

Here’s what we know:

So, based on this evidence, we’re left asking the question:

Why intentionally use misleading statistics to inflate consumer confidence in your product and try to put a face on dairy that doesn’t accurately represent where the vast majority of dairy products come from?

We’ll let you figure that one out on your own.

got truth? exists to expose the truth that the dairy industry tries to hide, enabling consumers to make informed decisions about the brands, products, and business practices they choose to support. Learn more about got truth?.